On the road from Birmingham to the beach there’s a town called Lockhart a mile or so north of the Florida state line. In the early 1900s, it was home to a rich pine forest and what was then the biggest lumber mill in the country. Today the only thing a visitor might notice is the Confederate flag on a tall pole just off the highway, with a plaque to inform visitors about “Lincoln’s Tax War.”

This nonsense is part of the campaign by various troglodytes to cover up the fact that the Civil War was brought upon us by slavery. If your beliefs fall anywhere within this dark corner and you’re not willing to consider my side, go away. (PS: All comments are moderated.)

I wouldn’t be writing about this if I hadn’t recently learned about the Confederate Catechism,  which the bigots use to justify themselves. The booklet blames Lincoln and the anti-slavery forces for starting the war and rejecting what the booklet claims was the South’s legal right to secede. Though it’s still circulating, this little pile of crud was written back in 1929 by Lyon Gardiner Tyler, son of President John Tyler — and as I’ve just found out, a man with whom I share ancestors. His mother, Julia Gardiner, came from one of the families on my father’s side.

The connection goes back to at least the 1700s and I’m not descended from the Tylers. Still, it can really kill your day when a name from your family tree is associated with such an odious piece of history. Even more disheartening is that the war is a century and a half in the past, yet we’re still shouting and sometimes shedding blood over the issues at its core. Hatred and ignorance are values passed down through generations.

It helps to remember that our collective legacy also includes some great, inspiring stories. This year marks the bicentennial of one of those events: the founding of the Erie Canal, which the Swans traveled when they moved west in 1848. They took a canal boat or “packet” from Rome, New York to Buffalo, then went on through the Great Lakes to Illinois aboard a sailing ship.

My great-grandfather Adin Swan, then a young man of thirteen, recounted the journey to my grandfather. He in turn told it to my uncle, and my aunt left it written down for me. Though it was probably embellished over the years, it’s still vivid. These are excerpts: 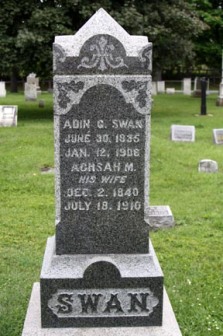 The long days on the packet got to be boring, but when the boat was close to shore, my brothers and I would hop ashore…We would look for wild onions for mother to use in cooking and found many berries, especially the wild strawberries.

We caught wild turkeys and at night after building a campfire on the land, mother would roast the turkeys on a spit across a fire pit for all of us to enjoy. These towns where we stopped each night were called “belt cities.”

At long last and after two weeks, our packet docked at Buffalo and we had our first glimpse of one of the beautiful Great Lakes. It was the Erie…I stood looking at this lake, the largest and bluest I had ever seen!

I remember that on Lake Huron we had a terrific wind develop. The wind howled in the ship’s rigging and the snap of the sails could be heard even below deck.

As we neared Green Bay we saw many Indians, for here were gathered many of the tribes of the Algonquins, among them the Potawatomi…At last our ship sailed into Fort Dearborn at the mouth of the Chicago River.

I wouldn’t be here if not for the pioneer spirit and courage of my ancestors, the vision of the canal’s founders, and the sweat of the workers, many of them Irish immigrants, who dug it out of the wilderness. No matter how dire things seem today, these people overcame struggles we can barely imagine. Let’s hope that when our descendants look back on us, they’ll find we overcame the ugliness in our history, and our present.

When a movie star lies about his past to protect his image, it’s usually a non-story. In fact, in Hollywood, it’s probably considered PR 101. But Ben Affleck went way over the line when he persuaded the PBS genealogy program “Finding Your Roots” not to mention an ancestor who owned slaves. As a result, PBS has suspended the next season of the show.

Affleck says he was looking for “the roots of his family’s interest in social justice.” As anyone who’s ever spent five minutes on Ancestry.com could have told him, digging into your past can bring both pleasant and unpleasant surprises, especially on this issue.

I learned a lot about my own roots from my wonderful aunt Rowena Swan, who spent years researching and writing a family history book. (She did it the old-fashioned, pre-Internet way too, walking around cemeteries and poring over files in courthouses.) As far as I know, none of the Swans in my line were slaveholders. Those who were alive during the Civil War were Union, including my great-great uncle, who died in Grant’s army.

However, another branch of the family, my great-grandmother’s forebears in Worcester, Massachusetts, had slaves in the late 1700s and early 1800s, including an elderly woman named Silvia. Yet another limb of the tree produced Julia Gardiner Tyler, who married President John Tyler in 1844 and joined him in fervently supporting the South after he left office.  According to Wikipedia, she got accustomed to owning slaves and enraged Union war veterans by flying a Confederate flag at her home on Staten Island.

I can’t run from, disown, or deny any of this. These are hard facts, just as it’s a fact that Washington and Jefferson had slaves. That doesn’t change their standing as founders of our country — but neither do their achievements make their slaveholding any less reprehensible.

Even in Silvia’s time, there were people who were affluent and powerful like her owners, but made different moral choices. My mother’s father, Thomas Walter Simpson, made that kind of choice when he hid his black workers from the mobs in the terrible Springfield, Illinois race riot in 1908. Ben Affleck had some noble ancestors too. But how many white families that came here before the Emancipation are completely pure?

We’re not our ancestors. But trying to hide their actions and our common history will only make things worse. 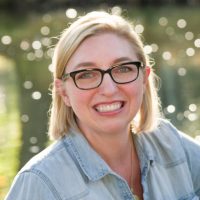 Be careful, I might convince you.. You are art.✨

Writer and Dreamer at work

Writing to fulfill a dream

Bringing the top literary professionals to you!